Cook homemade dried ham in lot of water until it gets soft and juicy.
Cool.
Cut into nice slices.
Grind horseradish on top of each slice, or pour each slice with horseradish sauce.
Horseradish souce: boiling chicken soup pour over grinded horseradish, stir well and leave until it cools. 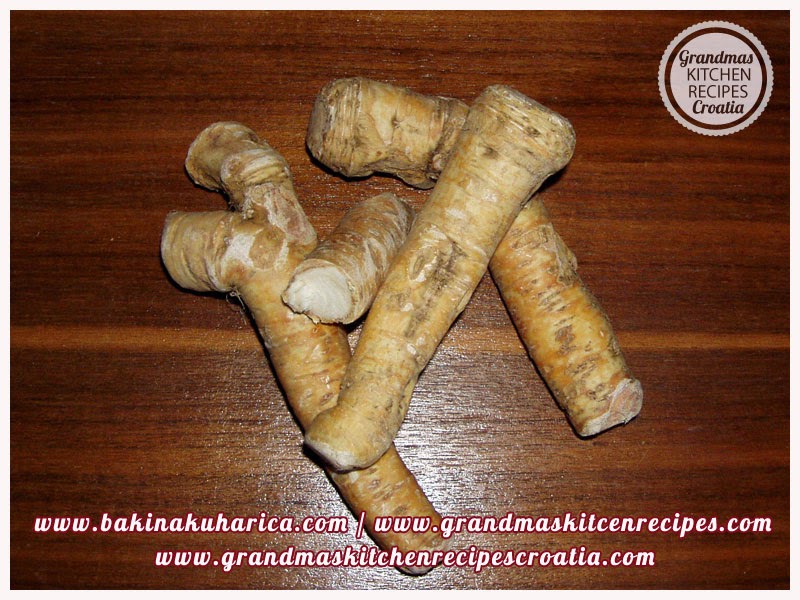 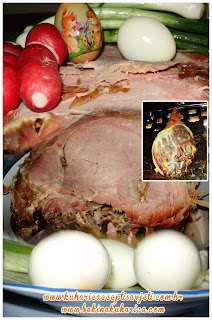 Posted by Grandmas kitchen Bakina Kuharica at 1:55 pm No comments: 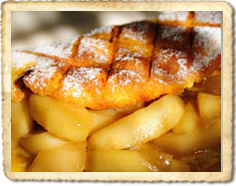 Filling:
1 apple, peeled, cored and sliced
2 tbsp butter
2 tbsp brown sugar
3 tbsp single cream
To make a filling, saute the apple slices in the butter and sugar until just tender.
Stir in the cream and keep warm, while making omlette.
Place the egg yolks in a bowl with a cream and sugar and beat well.
Whisk the egg whites until stiff, then fold into yolk mixture.
Melt the butter in a large heavy-based frying pan, pour in the souffle mixture and spread evenly.
Cook for 1 minute until golden underneath, then place under a hot grill to brown the top.
Slide the omlette on to a plate, add the apple mixture, then fold over.
Sift the icing sugar over thickly.
Serve warm.
Cut into thin slices when cool.
Posted by Grandmas kitchen Bakina Kuharica at 9:52 am No comments: 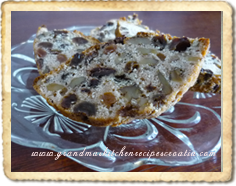 Mix 4 whole eggs, 35 dkg of sugar, 1 vanilla.
Add 25 dkg of raisins, 25 dkg chopped walnuts and 40 dkg of flour.
Bake in oven at moderate temperature.
Cut into thin slices when cool.
Posted by Grandmas kitchen Bakina Kuharica at 9:48 am No comments: 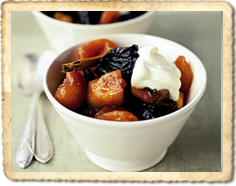 6 tbsp caster sugar
1 bottle red wine
1 vanilla pod, split
1 strip pared lemon rind
4 pears
2 figs, quartered
225 g raspberries lemon juice, to taste
Put the sugar and wine in a large pan and heat gently until dissolved.
Add vanilla pod and lemon rind and bring to boil.
Simmer for 5 minutes.
Peel and halve the pears, then scoop out the cores, using a melon baller.
Add the pears to thy syrup and poach for 15 minutes, turning the pears several times, so they colour evenly.
Add the figs and poach for further 5 minutes, until the friuts are tender.
Transfer the poached pears and figs to a serving bowl using a slotted spoon, then scatter over the raspberries.
Return the syrup to the heat and boil rapidly to reduce slightly and concentrate the flavour.
Add a little lemon juice to taste.
Strain the syrup over the fruits and serve warm.
Posted by Grandmas kitchen Bakina Kuharica at 9:44 am No comments: 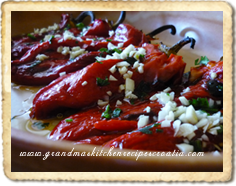 Preheat oven to 180 degrees.
Line a baking sheet with foil.
Lay peppers on their sides on the foil, stems pointing sideways.
Put baking sheet in oven and allow peppers to roast for 20 minutes.
Remove baking sheet. Using tongs, give the peppers a half turn, then place back in the oven for another 20 minutes. Check to make sure peppers have fully roasted. The skin should be charred and soft, and the peppers should look slightly collapsed. If they don't look ready, let them roast for a few more minutes. When they're done, remove baking sheet from oven. Cover pepers with plastic foil and let them rest for 30 minutes. Remove plastic foil and peel the skin off the peppers. Finely chop garlic, sprinkle over peppers, season with olive oil and salt.
Posted by Grandmas kitchen Bakina Kuharica at 9:41 am No comments: 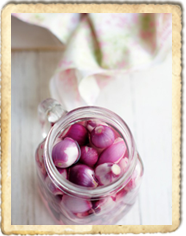 Find a largish bowl, big enough to hold all of the onions and add the table salt.
Mix it all together well then cover and leave overnight.
Next day, rinse off the onions in cold water and then allow them to dry as much as you can.
Divide your onions up between some pre-sterilised jars.
Place the whole spices, coriander, mustard and peppercorns in a mortar and pestle and just crack some of them gently with a few presses of the pestle.
Separately place the vinegar, spices and sea salt in a saucepan and bring to the boil, stirring to dissolve the salt. Simmer with a lid tightly on for 5 minutes.
Remove the bay leaf and pour the vinegar into a sterile measuring jug through a clean sieve. Retain the contents of the sieve!
Top up each of the jars with the vinegar solution and apportion the spices from the sieve evenly into each jar before sealing tightly and storing away somewhere cool and dark.
It’s best to leave them alone for at least two weeks before tucking in.

Posted by Grandmas kitchen Bakina Kuharica at 9:32 am No comments:

Autumn, the period of year with so rich and beautiful colors, in the kitchen of my Gramma meant a time of preparation for winter. At the end of summer, when all the passion of the summer sun slowly cease, my pickled cucumberGramma used to pickle cucumbers in nice glass jars, jar by jar, as she brought them from the garden - fresh, small and green. She used to pickle peppers, too – big, round, meaty yellow ones, then red pointy ones we called „horns“, she was baking chutneys and jams and the kitchen was entvined with aroma of roasted peppers, with rich smells of vinegar, pepper and salt. Gramma candied apricots and baked plum jam, made apple, cherry or walnut liqueur along ... preparing her pantry for late fall and winter. All of that was so interesting to watch, I felt a bit like a hamster, bringing together with Gramma all those jars and bottles in the pantry and putting them on shelves sometimes by color, sometimes by the type of vegetables and fruits and sometimes by size. Jolly events in the yard was brought by chestnuts and beaujolais. We would all gather around the old stove in the backyard and talked, while Granpa was cutting the chestnuts and fried them in some old pan, stirring them every few minutes and grilled with passion. Gramma was pouring beaujolais, which would be usually brought by someone of our neighbors since my family did not have grape-vineyard. Even I used to get a glass of that sweet, aromatic juice that is just about to become wine. 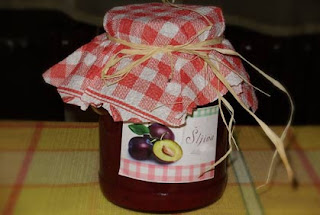 However, the most interesting events of autumn, for me, were brought by plums. Plums, blue as the sea, was full of drums and barrels. My Granpa baked brandy, together with my dad and uncle. All three of them were smartassing about what's brandy like this year and would it be better to make double-baked brandy this year or not and whether this year's neighbor George's brandy is better than ours. They were talking and talking, laughing and drinking and a boiler for the brandy was whiffing and fuming, brandy was pouring out bringing joy and laughter in the yard, where the neighbors gathered mainly in the evening and smartassing whose brandy was better this year. Meanwhile, Gramma had her own "concerns" with plums. I loved, and still adore dumplings with plums. So simple dish, but so underappreciated. I was rolling, together with Gramma, dumplings, tucking the plums in soft potato dough and so imaatiently waiting the first ocassion when Gramma will cook them. And then, that wonderful smell of plum jam. Cooked jam or baked jam, as Gramma decided that year. The kitchen was covered with rich, full scent of plums, cinnamon, lemon and rum. My Gramma looked a bit like a witch, stirring constantly the plum jam, entvined with a cloud of aromatic steam. I've had a task to put a pickled ring of lemon on top of each jar of jam, then close them all and "tuck" in a blanket so they could gradually cooled until the morning. Even today, the most tasty part of the plum jam is that lemon ring, infused with the aroma of plums, reminding me how cheerful and colorful fall was in the kitchen of my Gramma. 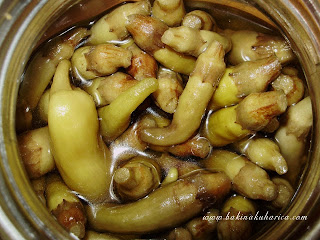